…because we at First Unitarian recognize that historically and currently, Black Lives have not mattered as much as white lives. The phrase does not mean “only” black lives matter. It means that it’s time that we stand in solidarity with African American people to undo the systemic injustices that hold them back from true equality and equity jobs, housing, health, and education. 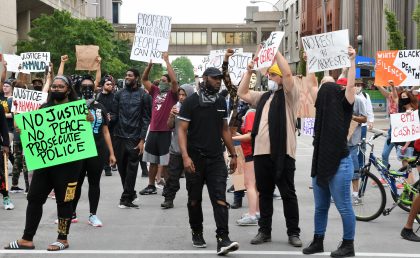 Our Monthly Vigils
One of the actions taken by First Unitarian was that we stood in vigil outside our church the second Sunday of the month after church.

The Women’s Alliance of First Unitarian Church began sponsoring vigils in solidarity with the Black Lives Matter movement in June, 2015. All were welcome to participate in these 30 minute vigils, held after the Celebration of Life (around noon) every second Sunday in front of the church building on Fourth St.  Signs were provided.

Our faith calls us to witness and take action in the face of injustice. Our vigils sought to provide a reflection and a connection space for people calling for racial justice, for affirmation that black lives matter, and for an end to police brutality. That is why, with the publcity spotlighting the horrific police brutality resulting in the shooting deaths of Louisville local Breonna Taylor, as well as the knee-on-the neck strangulation of the hand-cuffed George Floyd in Minneapolis, and the police ignoring the modern-day lynching of Ahmaud Arbery, shot for joggng while black, First Unitarian is again rising up in solidarity with Louisville’s African-American community and affirming our commitment to Black Lives Matter efforts, be it with or at protests, with medic supplies, bail bonds, or white bodies to protect black bodies.

The vigils were but one piece of First U’s efforts to engage in a conversation about race. Each week we light a candle in the Celebration of Life in silent testimony to our determination to raise our own awareness, and to pursue justice. Our congregation raised a Black Lives Matter banner on the front of the building on Sept. 27, 2015.