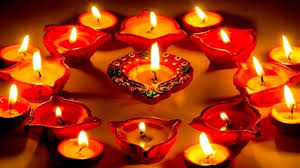 Diwali (also called Divali or Deepavali) is a “festival of lights” that celebrates the triumph of light over dark and good over evil, and the blessings of victory, freedom, and enlightenment. The name comes from Sanksrit dipavali, meaning “row of lights.” On the night of Diwali, celebrants light dozens of candles and clay lamps (called diyas), placing them throughout their homes and in the streets to light up the dark night.

In most of India, Diwali consists of a five-day celebration that peaks on the third day with the main celebration of Diwali. In other places where Diwali occurs, usually only the main day is celebrated.  Diwali is primarily celebrated by followers of the Hindu, Sikh, and Jain faiths. However, the holiday is celebrated throughout India, Singapore, and several other South Asian countries as a national holiday, meaning that people outside these religions may participate in Diwali celebrations, too. Hindu, Sikh, and Jain communities in the United Kingdom, United States, Australia, and elsewhere around the globe also regularly celebrate Diwali.

We will have a special celebration with a play led by Pat Allison and Lori Hickling.  It will be a joyful service!  Please join us!!