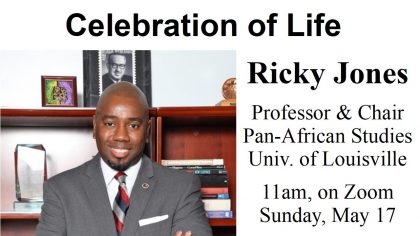 Christianity, like many religious traditions, revolves around the ideology and actions of an individual many would label a radical activist or social justice warrior if he lived today. How did that radical tradition get lost as many contemporary religious stalwarts seek to maintain a status quo marred by marginalization and what can we do about it?

Ricky Jones, Professor and Chair of the University of Louisville’s Department of Pan-African Studies is a nationally respected political analyst and public speaker.   Raised by his grandmother in Atlanta’s Carver Homes housing project, he not only became the first member of his immediate family to graduate high school, but by age 28 he also earned a Ph.D.  He has written scores of both scholarly and popular magazine articles and books.  He is currently working on a new book titled, Colin, Confederates, and Con-Artists: Essays on Race, Sport and America.   Jones is the host of the award-winning “Ricky Jones Show” on The REAL 93.1 FM Louisville from iHeart Media. He is a contributing columnist for the Louisville Courier-Journal as well Louisville’s most popular alternative weekly, the Louisville Eccentric Observer (LEO).