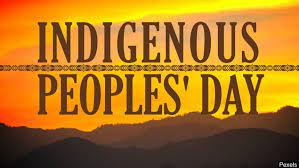 Also known as First People’s Day, the celebration of Indigenous Peoples Day is observed annually to acknowledge the achievements of Indigenous people who represent a rich diversity of traditions, cultures, and languages.  Colonization of native lands by explorers such as Columbus helped to foster the long-standing marginalization of native people and their traditions in our country; thus, this day of observance was set on the same day to counter the civic Columbus Day holiday.

On this Sunday Rev. Lori is joined by local Indigenous activist Angela Arnett Garner.  Together they will address the relationship between the historic marginalization of First Peoples and continued manifestation of such inequity during the pandemic period, as well as how their contributions enrich our culture.

Angela is a lifelong Unitarian Universalist, raised in the First Unitarian Universalist Church. She has been a long-time social justice activist and the founder of the Indigenous Peoples Day movement of Kentucky.  Additionally, she spearheaded the campaign to help Stanford City Council pass the first IPD proclamation in Kentucky history, and helped local officials in cities across Kentucky pass 22 IPD proclamations (more than any other state since the movement began in 1992).  She assisted in the passage of two resolutions in the Kentucky Legislature, recognizing Indigenous Peoples Day in our Commonwealth, and has worked with Gov. Beshear’s office on the signing of two statewide IPD proclamations.