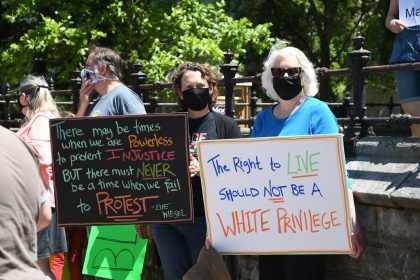 The Justice Ministry enthusiastically supports the justice passions of congregants. Examples of our work include sponsoring a refugee family, funding the Solar Array Project on First U’s roof, and raising money for the Louisville Bail Project.

Members of the ministry work with partner organizations in the areas of Reproductive Justice (KRCRC-Kentucky Religious Coalition for Reproductive Choice which also has its office in the Education Building of First U), Environmental Justice (REAL – Renewable Energy Alliance of Louisville), Immigration Justice (ICIJ – Interfaith Coalition for Immigration Justice) , and Black Lives Matter and Racial Justice (LSURJ –Louisville Showing Up for Racial Justice). With the unjustified killing of Breonna Taylor by police breaking into her apartment in the middle of the night, our racial justice efforts have moved into the forefront [image above is of congregants rallying on the church sidewalk on May 31st] as the entire nation was rising up against police brutality and racism.

First Unitarian is a founding member of the CLCM — Central Louisville Community Ministries which helps low-income people in the 40203 zip code who need help paying their rent or their utility bills and are risk of being evicted; their office is located on the second floor of the First U Education Building. In recent years First U also joined CLOUT (Citizens of Louisville Organized and United Together) to promote and work for legislative and policy change in our local area. We believe that by combining energies with the 20+ other justice-oriented relgious congregations in Louisville, we geometrically increase our effectiveness, most recently in the areas of affordable housing for low-income folks, restorative practices in JCPS schools, supportive housing for the mentally ill and addicted, plus working to create a citizens’ review board (with teeth) to ensure de-escalation policies are followed by the Louisville Metro Police Department.

Every other week in growing season, First U also provides its social hall as a Fresh Stop Market, making organic vegetables available at low-cost in the food desert of Old Louisville.Volunteers from the church and community helps keep costs low and accessible. First U also has also partnered with God’s Girls who used our social hall to provide free home-cooked meals to anyone who walks in the courtyard gate.[currently in hiatus due to COVID19]

For more information, or to become part of any part of this work, contact [email protected]

You can also receive an email with notices of important justice work being done in the community by requesting to be put on the justice list; you will receive an occasionally-produced edition of the First U Justice Broadside.